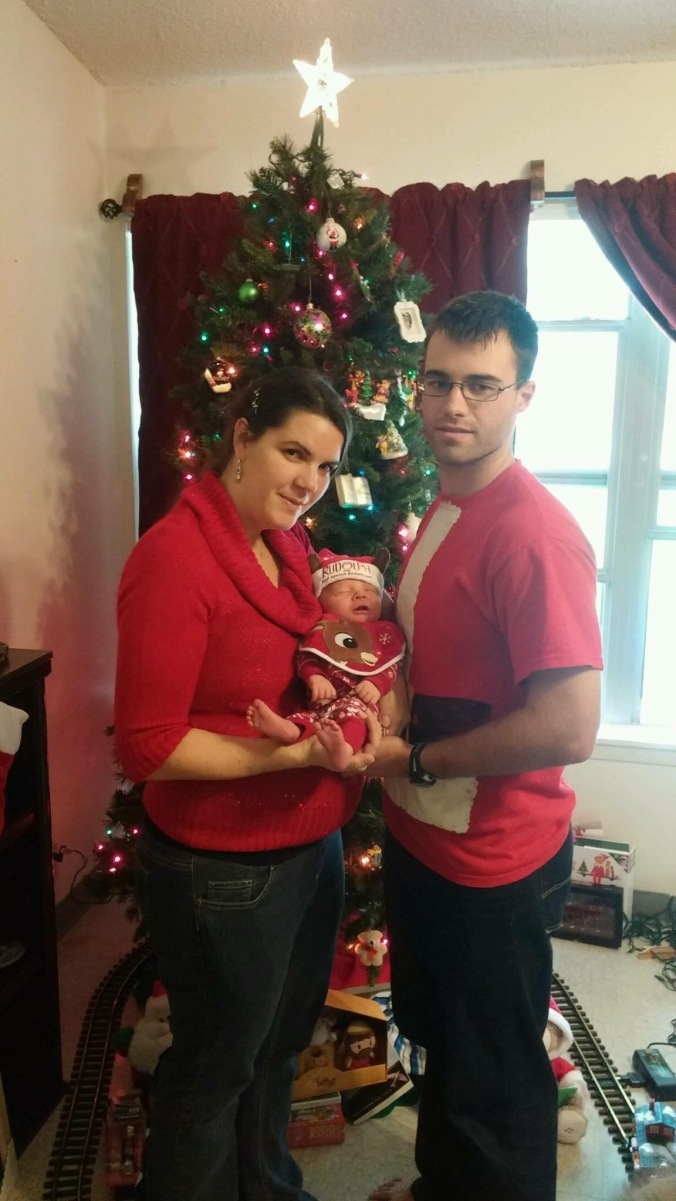 Here is the first of many testimonies of God’s faithfulness in the journey through infertility! Morgan and Josh are good friends of mine, and we walked through infertility together. It is always nice to have a support system to walk with you during difficult times. Morgan was willing to write out her story to share with you all and I am so grateful that she did! I hope their story encourages you!

My husband Josh and I married in June of 2011. We had decided that we were going to wait to start our family until he was done with graduate school. He finished in the Spring of 2012 so we decided to start “trying” that winter. I went to my doctor and talked about what our plans were. He suggested getting off birth control right away so my body could regulate out so I did. My body did not regulate well. We tried for a couple of months before Josh left for basic training with no success.

Josh left for training so I decided to focus on eating well and exercising so I could be ready, to my dismay, I had not had a period for 4 months, I know tmi, at this point I was starting to worry that something was wrong, so I made an appointment to see my doctor. The appointment did not go well, after an ultrasound and blood tests I was diagnosed with Polycystic Ovarian Syndrome (PCOS) and a septum in my uterus. They told me that I would most likely have to have help getting pregnant if I would be able to at all. I was put on progesterone to regulate my periods for health reasons and metformin to help reduce the Ovarian cysts. When Josh and I were reunited for longer than a few days at a time we started up again. Months went by and nothing. Every negative pregnancy test was heart wrenching. Not to mention the side effects of the progesterone making me irritable and the metformin making me feel sluggish. Needless to say our marriage was strained. We went to see a gynecologist in Aug of 2013 and he told us we had to “try” for a year before he could do anything. That was not what I wanted to hear. He did take me off of my medicine which helped me feel better physically but emotionally I was a wreck. My heart was hurting and my husband didn’t know how to help.

Fast forward one year in July 2014 I had only had maybe 4 periods since my last visit, my doctor puts me on clomid and performed an ultrasound to which he said my ovaries looked like Swiss cheese due to all the cysts. With a new found hope that these drugs would work we set out on our journey again with no success. Each cycle was a failure and the medicine was increased each time.

Then the news came the Josh was deploying and we didn’t know for how long. I felt like God was against us and that our dreams of being parents would never come to fruition.

When I found out that Josh would be getting back sooner than expected I went back to my doctor which put me back on clomid. He then told me that if this cycle did not work that we would have to be sent to a fertility clinic for further treatment. That scared me because we did not want to do those kinds of treatments and we didn’t know if we would have been able to afford it.

Now, I must back track a little. In September of 2014 we had been actively trying for almost two years. We were both broken hearted and wanted to grow our family. Josh comes to me with the idea of adoption. I had thought about it a little before but needed time to process my feelings and come to terms with the possibility that I may never be able to physically bare a child. After a few weeks of thinking and praying I decided that adoption would be the right course of action for us over more invasive procedures such as IVF.

We did our research and talked to many agencies and found one that we felt comfortable with. We got the paper work and filled it all out. Now let me tell you, that was a lot of paper work. There is a lot involved when adopting a child.

So there we were on our last cycle of clomid. I remember picking it up and the pharmacy tech said good luck to me. I don’t know why but it struck me wrong, maybe it was because at this point I was just going through the motions, I didn’t believe that that cycle was going to work. So we went through the cycle and I went in for my ultrasound to see if I had eggs about to release and I did, 3 to be precise. I left with so much hope. I waited the 10 days and took a pregnancy test and was broken hearted when it was negative. That was a Friday. Over the weekend we gathered all of the adoption papers to submit them on Tuesday since I had class on Monday.

Monday night I almost fell asleep in class. I stopped on the way home to get a pregnancy test to make sure I wasn’t pregnant before starting a medication that you cannot take while pregnant. I get home and take it not thinking anything of it because I knew it was just a precaution. I looked down as the color ran across the window and there was a line. It was a line I had never seen before. I checked the box to make sure. There it was! The long awaited line that meant I was pregnant! I ran out to Josh and practically forced the test in his hands for him to look at. We both cried from excitement. The next day I went into the clinic to take their test, just to be sure and it too was positive!

We decided to not submit the papers to adopt not knowing what was to come. It is still in our hearts to adopt and we will some day. Anyways, in Dec of 2015 our handsome little boy was born and we were in love from the moment we laid eyes on him. Evan is our miracle baby and is loved so greatly.

There was an error retrieving images from Instagram. An attempt will be remade in a few minutes.